If I am building items for a diorama and I have all these great ideas for it why not just get on it? 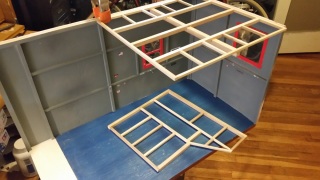 Some of my big ideas include covering a 4’x2′ shelf with garage, parking lot, paint booth, maybe a drag start with a light tree. This endeavor proved to a bigger project to start with as I started sketching it out.
I decided to make a garage for a smaller shelf that could later be a module in a bigger project.  I like this idea of using modules especially for what I originally had in mind making it a lot easier to relocate at a later time.
I grabbed some foam board and craft sticks at the dollar store and broke out the razor knife and straightedge and got busy. It will have the footprint of about 1’x2′ White glue worked great for assembly.
I rustled up some scrap clear plastic from packaging (a good reason to buy a pie) made a few windows which later I plan to add a photo of some scenery on the outside.

My ending result so far is 3 walls. I have not secured the walls down to floor yet this pic is me just laying out to see how it looks.

I had some trash left from a broken window fan and with some bits of plastic and imagination, I was able to make a car lift.

I still have to make my garage front, decide whether to make the space where the orange 32 Ford is sitting an office or a car display and I did start on a staircase for the office option. The area under the awning is where my GMC Tow truck will park. I also plan to make a flat frame only for the roof and then wire up with lights. More to come!

The art of scale model building.

The Number One Supplier of Ship Model Kits, Tools, Fittings and More...

Recording adventures in miniature painting by an semi-talented painter whose skills are not as good as he would like them to be...

Free Wargames Rules And Other Wonderful Things For Miniatures, Board and Role Playing Gamers

A Blog for Miniature Painters and Hobbyists