First off, one thing that needs to be clear, in order to build a decent electric Radio Control airplane you must have a few excellent aircraft related movies or TV shows to watch while you build. “The Battle of Britain” or “Midway” usually suffices for me. If I really need some inspiration for “Flight of the Phoenix” either versions are the ticket.

Those movies have some iconic aircraft that is inspiring and with that said when someone wants to jump into RC planes, they want a P-51 Mustang, Spitfire or a Corsair. Well just like Elliott says Model Aircraft have to have the same dynamics as the real thing. Pilots do not start off flying low or mid wing planes like the popular warbirds they start with trainers and hopefully, I can explain why this a good plan to follow.

There are many types of airframes but for the purposes of this blog here is the Basic Three:

Let’s start with the high wing, this image is a Cessna 172 but it could be a Piper Cub or other similar airframe. Think of a Pendulum on a clock, the weight of the high wing plane is below the wing. It adds to the self-righting of the plane. How many times have you seen a Piper Cub do a roll or much in the way of aerobatics? Not much the airframe does not lend itself well to being upside down. An easy way to start flying, notice this one has a tricycle landing gear, some would argue the tail-dragger style of cubs are easier to land and to start off landing with. As far as RC aircraft the Tail Dragger is easier on repairs from hard beginner landings or if you find yourself like I do taking off and landing in tall grass a taildragger can be a huge advantage over trike gear.  Regardless, once in the air, a high wing can be very forgiving, when control surfaces are trimmed out properly it can usually fly straight without input to stick. Most can even be flown with rudder elevator only to ease a pilot into using the ailerons. 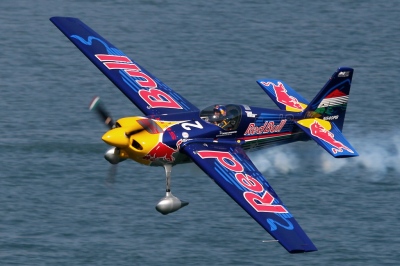 The mid-wing Edge 540 is a very popular plane among sport and 3-d flyers. Where the wing is almost in line with horizontal stabilizer it becomes something that can be flown on its side easily (knife edge) or flies inverted. almost as if the plane is equal when inverted to the dimensions as it is right side up. Planes like these require constant input from the stick, if it goes on its side you have to “right” it. Throttle, Ailerons, and elevator become main controls with rudder playing a huge part when on its side as it becomes the elevator and now the elevator is the rudder. Both surfaces are considerably bigger than on a high wing plane. The mid-wing helps to eliminate a “coupling” between the main wing and the tail stabilizers. On some aircraft when attempting a roll via ailerons it requires a lot of input from tail surfaces to keep roll even as it turns into a loop midway. Makes for very clean sharp rolls aka “snap roll”. Planes like these usually have a lot more power to make use of as well. 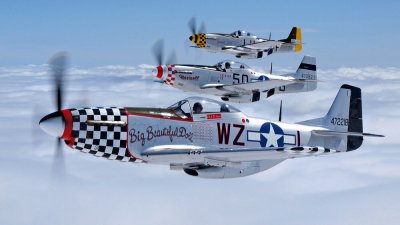 The p-51 like many other “warbirds” have a low wing. These planes had payloads with external fuel tanks and weapons. Other requirements for them like carrier decks and limited runways among a big list of other things that civilian aircraft did not.  The real ones took lots of training to fly well. They were essentially designed from the point of trying to outfly enemy aircraft, like tighter turning, tighter loops, etc.  As far as RC aircraft goes I would not want to discourage anyone from flying what they want but you might want to have some spares around if you start this way. But you know that feeling when you have built a really great static model? It is a whole other dimension to fly it in front of you, see it against the skyline and land it. Bottom line they are hard to fly compared to a trainer but a great thing to look forward to as a goal.

I have a few parts cut out I will go into more detail in next post.

The art of scale model building.

The Number One Supplier of Ship Model Kits, Tools, Fittings and More...

Recording adventures in miniature painting by an semi-talented painter whose skills are not as good as he would like them to be...

Free Wargames Rules And Other Wonderful Things For Miniatures, Board and Role Playing Gamers

A Blog for Miniature Painters and Hobbyists